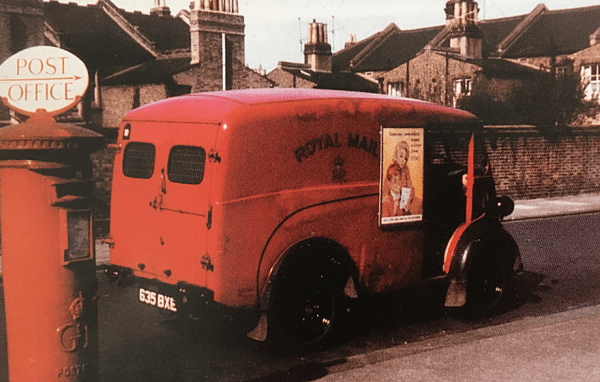 My driver training began in November 1963, at which time I was a postman at the Battersea District Post Office on Lavender Hill, London, SW11.

Along with other aspiring drivers I embarked upon a fortnight of instruction using an old J-Type fitted with the 3-speed gearbox. No synchromesh so, of course, there was much grating of gears in our inexperienced hands. Our instructor first, then later one of us, would drive the van along the busy South Circular Road to our area of operations. It seems hard to believe in these days of seat belts, airbags and legislation that then, the two trainees not actually driving sat in the back of the van on ordinary folding wooden chairs with no form of anchorage or restraint.

Having completed the initial two-week training period there followed a long spell of what was known as ‘confidence driving’. This consisted of two hours each morning under the eye of a qualified driver. Any van that was available was used, all types that are nowadays only seen at rallies.

My driving test was conducted in a decrepit J-Type – OYF 542 – on this morning it was covered in frost and we were to find that some things such as the horn did not work. Despite this I passed the test.

Taking up driving duties, I was allocated to a three man ‘set’ in which the shifts involved were an early driving week, a late driving week, with the third week on walking duty. The vehicle for the driving shifts was a late J/B with the luxury of a 4-speed synchromesh box. It did have certain tendencies, like the starter motor sticking and the engine cover suddenly detaching, resulting in a cabin filled with heat and noise. It also had rubber wings which if leaned upon would give way depositing the unwary onto the floor!

In 1964, the smaller vehicles in the Battersea fleet were exclusively J-types of varying age. Of all the J-Types 716 BXE was the fleet ‘showpiece’ usually kept in spotless condition with a meticulous polishing regime.

The main job of the morning was the High-Street parcel delivery from 9am to noon. This covered a wide area around Battersea Park, Battersea Bridge Road, many small streets and firms alongside the River Thames. It was a constant race against the clock as the number of parcels varied with the time of year. Summer would see lots of small rough wooden boxes from Great Yarmouth containing fresh kippers; Christmas would bring turkeys with just a label round the neck.

The evening period from 7pm to 10.30pm was interesting. Technically we were supposed to knock and wait for an answer but even in those days many people were loath to open the door at night; calling through the letterbox that you were the postman would often be greeted with disbelief at around 10’ o’clock in the evening. What usually happened was that it was better to put the item through the letterbox, ring the bell or bang on the door knocker and take off for the next call while the hall lights were coming on.

By 1965 interlopers began to appear in the shape of J4 diesels. The first of the quartet of J/Bs to go met its demise under a large lorry. The driver, Ted, who was politely known as ‘accident prone’, escaped, by some miracle, with no more than a cut on his finger. In a previous accident, he had been in a J-Type which overturned after colliding with a car.

I went on to become a postman higher grade in mid 1966 and thus parted company with my J/B. The three remaining J/Bs were replaced in June and July 1967 by J4 diesels. One ironic note was that the much polished 716 BXE came down in the world somewhat, as a few months later I saw it being driven along by Clapham Common. By now it had become a humble mobile greengrocers shop!